I started out by watching Kung Fu movies and then going out to the woods behind my house to do my own "Kung Fu". Who would have thought that a small town kid would one day train extensively with Jerry Poteet, a student of Bruce Lee...one of the guys in those movies I watched?

The small town where I lived didn't have and martial arts schools close to us, but it did have wrestling. A friend convinced to join the wrestling team because it was "fun". He was right. It was and I loved it. Wrestling gave me an outlet for movement that I desperately needed.

After graduating High School, I went to the University of Oklahoma. I made a lot of friends there. A few of them did have martial arts training, and they shared some of that knowledge with me. I got into theatre and dance while I was there. Again finding a needed outlet of movement. I transferred to UCLA in 1995 and really got a heavy dose of movement. I also met Ed Monaghan, my stage combat teacher, who would prove pivotal in my martial journey.

After graduating, I began training at Ed's school, Combative Arts Academy. A lot of great martial artist were brought into to teach. I learned Ed's Kung Fu, but I also trained in Muay Thai, Savate, BJJ, Judo, Kali, Tai Jitsu, Aikibujutsu, and Jeet Kune Do.

I was at the school so much that it was an easy step for me to become an assistant instructor. In addition to assisting Ed at Combative Arts Academy, I also helped him at UCLA with his classes and summer camps.

Ed trained with and became an instructor under Jerry Poteet in 2000. That meant that I got access to Jerry Poteet. My first seminar was one at Combative Arts Academy in 2000. It was amazing! I would attend more of those over the next ten years along with being the "plus one" for Ed when he went to Jerry Poteet's instructor seminars where all of his instructors and their assistants would come together to train.

I spent a year in Japan, teaching at the Sho Kosugi Institute. I also got in some training in Aikido while there.

When I returned to Los Angeles, I went back to Combative Arts Academy. I was looking for work, and a few of the guys at the school said I should join them working security. I started working at the hot spot clubs in Hollywood in 2003. I soon started running security teams at various places in Los Angeles and would continue to do so for the next 7 years.

Having to apply my martial skills often, my focus in training shifted away from sport and more into combat. In 2005, I tested for and was awarded my black belt by Ed. Wanting to continue my training even more, I asked Ed if I could train directly with Jerry Poteet. He said yes, but I would have to wait a bit longer before my private training began. In the early part of 2006, I was a part of a class that Jerry Poteet taught. In July of 2006, Jerry Poteet called and invited me to begin my training to become an instructor directly under him.

It was an intensive week of training that covered the basics. This was followed by regular training sessions with him. I also began teaching private students.

I would spend the next four years training with Jerry Poteet, teaching at Combative Arts Academy, working security, and teaching my own students. I was learning, teaching, or applying full time.

I met Catherine in January of 2009. We decided to move back to Oklahoma and raise a family and open up my own school. My training with Jerry Poteet doubled as we rushed toward a move date. Catherine and I got married in Los Angeles, surrounded by family and friends. Jerry and Ed both attended our wedding, as did a lot of other martial artists.

In August of 2010, I opened my first school, teaching Kung Fu and JKD. My wife also gave birth to our son, Elliot.

2013 was a year of ups and downs. The school was strong. My wife gave birth to our daughter, Quinn. She also graduated top of her class from nursing school. Things were amazing.

Then she was diagnosed with brain cancer. Surgery and treatment went well, but we decided to move the family to Winnipeg, Manitoba where Catherine grew up.

In the summer of 2014, Catherine had finished treatment and we moved to Canada. I opened another school here in Winnipeg in 2015, but still kept the school going in Oklahoma until I sold it in 2019.

I continue to share my knowledge and love of martial arts in many ways. Regular classes at the school, online classes, my YouTube channel, instructional videos, and worldwide seminars. 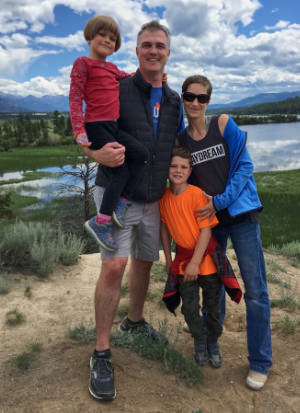